Tony Haynes, composer/director of the Grand Union Orchestra, tells the inside story of his music for the orchestra, its musicians and colourful history.

This month Grand Union made a gloriously successful return to Portugal, playing first in the Setúbal Music Festival, then in Lisbon. Audiences were were large, responsive and wonderfully enthusiastic, and I learnt the colloquial Portuguese for ‘sold out’ – esgotado, which literally means ‘exhausted’! The culmination of a programme supported by the European Cultural Foundation, these performances also formed the launch of a much larger project taking place over the next 18 months, working with musicians in France and Portugal, funded by the European Union Culture Fund (see also Post 21) – so it was  a very good omen.

To complement our professional performances, we were commissioned by the Setúbal Music Festival – the brainchild of the philanthropist Lady Helen Hamlyn – to create a 45-minute piece featuring about 40 local young percussionists and brass/wind players, from a variety of social and cultural backgrounds. The first two festivals had featured community projects and a very impressive procession directed by a long-time Portuguese Grand Union musician Fernando Molina (who of course was also crucial to this project), and Lady Hamlyn’s ambition was to take their participation a stage further.

Setúbal is Portugal’s third largest city after Lisbon and Porto, and still an important sea-port, so it was natural to devise a piece reflecting the country’s maritime history. The work with the students therefore took the form of an imaginary sea journey – uma viagem do imaginário – beginning in China, through India, West Africa and the Caribbean, and finishing in Brazil, giving also an opportunity to explore some rhythms (bhangra, African 12/8, reggae and samba) unfamiliar to the young musicians.

It was also a chance to revisit some of the Grand Union Orchestra’s classic Portuguese repertoire, notably from The Rhythm of Tides. Liana – a great discovery, one of the new generation of singers who are transforming the art of fado – made her GUO début, and sang two of my songs to words by the poet Manuel Alegre. One of these I’ve already written about, Depois o Bosque Se Fez Barco (Post 9), and a note on the background to these songs and Manuel Alegre’s writing appears below; Meu Amor é Marinheiro is one of his best-known poems, and a great deal simpler – on the surface at least!

The melody is entirely derived from a song by Martim Codax, a mediaeval Portuguese jongleur (like a troubadour, but not born into the nobility!), who came from Galicia. Vigo (now actually in Spain) is another historic port on the Atlantic, from which voyages of discovery and merchant ships would have set off.

This melody, unaccompanied and sung in English (as on this recording), forms an apt introduction to the song; here is the original Portuguese version:

O waves of the swelling sea, my love has gone fom me; pray God he may soon return

Meu Amor… itself is sung here by its original deeply soulful interpreter Maria João Silveira; the guitarist is Mingo Rangel (celebrated in Post 18), who we were delighted to have with us again for these performances; the incomparable Shanti Paul Jaysinha (see also Post 9) plays flugelhorn.

The first two lines of the song follow the mediaeval melody very closely, still quite free but with  rhythm and accompaniment adapted to the metre of the poem; the harmony on the other hand is quite chromatic. The entire song is only 32 bars long, and structure is extremely simple. It falls into three 8-bar (or 4-line) sections with a change of key for contrast in the second section, returning to the home key for the third, and completed by a 4-bar (2-line) ‘tag’ and a 4-bar extension of the melody on flugelhorn. Here is the first section: 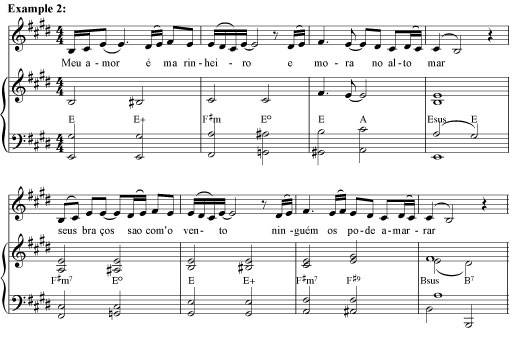 My love is a sailor, he lives on the high seas; his arms are like the wind, no-one can tie them up (the translations here are literal!)

The rhythm section now enters and the tonality shifts from E major to C major; the melody (until the last couple of bars) is exactly the same as in the first section, but adjusted to the new key (with C, D and F natural instead of sharp); and the harmony has a similar chromatic flavour:

My love said that I have in my mouth a taste of longing; and hair in which are born the winds and freedom

At this point the brass add sonorous block harmonies as the tonality returns to E; the hamony becomes more intense (one harmonic effect to note from this point on is the kind of ‘double augmented’ chord as the Emaj7 chord moves up through Fmmaj7 or Fmmin7 to F#m7 at the beginning of the 4-bar phrases); the melodic contours are the same, but a fourth higher, before dropping again:

In the final section, the vocal line rises to its highest point, still following the shape of Martim Codax’s original melody; it is shadowed now by the flugel-horn, breaking free of the brass section; and it is only 4 bars long, leaving the balancing phrase to the flugelhorn, beginning an octave higher than the original melody before dropping down the original pitch and having the last word:

A heart that was born free can never be chained up

(NB: as always in interpreting songs of this kind, the phrasing as sung does not necessarily correspond exactly with the written version!)

Manuel Alegre and The Rhythm of Tides

As I wrote in an earlier Post, it was in the early 1990s I first had the idea of creating a show about the rise and fall of empire. I thought it would be more dramatic, and more varied and colourful, if seen through the eyes of the Portuguese. Dating from the voyages of the early ‘navigators’, the Portuguese was the first European empire to be established, and the last to collapse – not until the early 1970s, in the last throes of the fascist dictatorship founded by António Salazar fifty years before. During the course of the project, I had the privilege of meeting many Portguese artists, intellectuals and politicians – among them the celebrated poet Manuel Alegre.

In the years leading up to the 1974 Revolution, many dissidents and opponents of the régime – and especially critics of the catastrophic attempts to hold on to empire at all costs – were exiled abroad; Manuel Alegre lived in Paris for a long time. After the Revolution, they were hailed as heroes and helped build the new democracy in Portugal – often quite literally, since until quite recently many musicians, writers and artists served as deputados, members of the Portuguese parliament; Manuel Alegre himself has twice been a presidential candidate – though sadly never elected.

Above all, Manuel Alegre is a great poet, and has also written a couple of powerful novels. The title of his best-known work O Canto e as Armas is an ironic twist of the first line of Vergil’s Aeneid ‘Arma virumque cano…’ – ‘I sing of arms and the man…’, ie Aeneas, who was regarded as the founding father of the Roman Empire. Ambiguity is key to Alegre’s writing, and like many artists critical of totalitarian régimes he uses a kind of code to communicate his views. This song is a good example: on the surface an artless romantic ballad, it is clearly a metaphor for the yearning for political freedom – all the more poignant, as it evokes Portugal’s maritime history.

With his permission, I set three of Manuel Alegre’s poems for The Rhythm of Tides (Por Mares do Imaginário in its Portuguese title), which all appear on the original CD in their full-length versions. Depois o Bosque se fez Barco I analysed in Post 9; the other is the poetically complex but unnervingly economical As Colunas de Madrugada, about the Angolan war, which forms the first part of A Country Conscript (see Post 8).

This entry was posted on May 30, 2013 by Grand Union Orchestra in Composition, Music and tagged analysis, lyrics, Portuguese music, Portuguese song, world music.